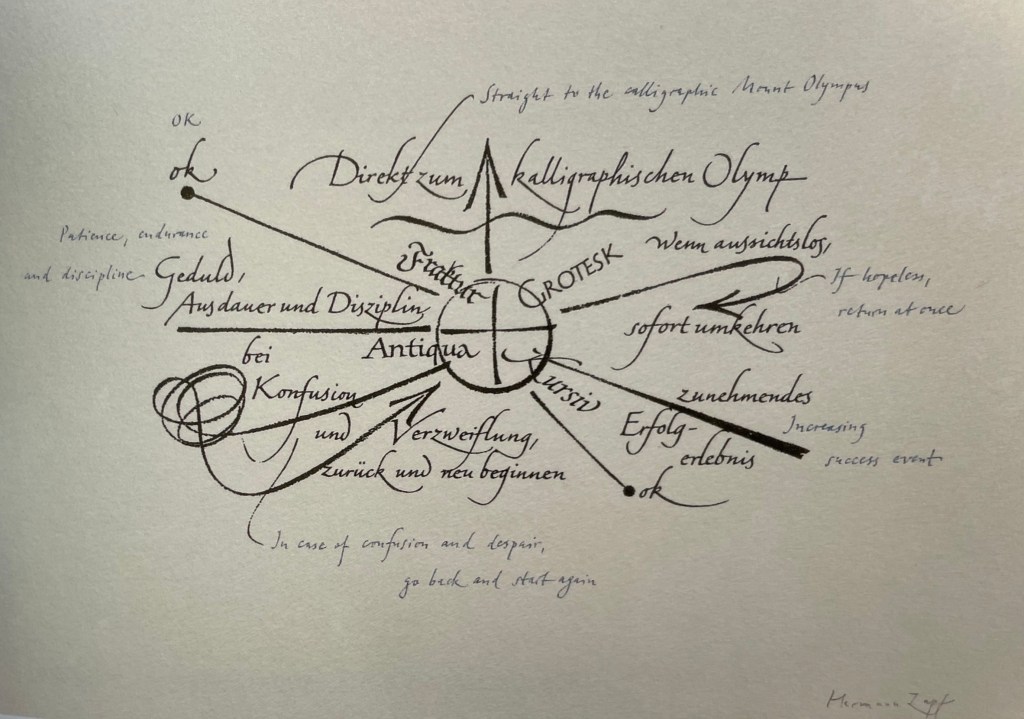 There are many kinds of letters in the world, and as calligraphers we remake existing letters, or interpret them, only rarely do we invent letterforms. Inventing letterforms would mean creating an alphabet which doesn’t exist, and that nobody could understand. So mostly we work with the conventional phonetic signs of our existing alphabet, similar to how a classical performer of music interprets the score, or for that matter, how a blues musician would circle around the same basics, infusing them again and again with life, at best.

Glenn Gould played Bach from the sheets, but even so, it is as fresh as if he had written the music himself. One gets the impression of a performer who neither felt home in the constructed world of the classical performer or in the world of popular culture. These things are more complex and mysterious than simple contradictions between old / new, pre-planned / improvised, free / disciplined.

Some of us like to push the alphabet in different directions, seeking to explore how calligraphy in the west, using our latin alpha-bet, can renew itself, how our letters can become more exiting, seeking to break new ground.

Miles Davis, John Coltrane, Keith Jarrett, Jan Garbarek. Jazz musicians with skill and knowledge who have broken new ground tonally and rhythmically. A jazz drummer once told me: ‘You can’t play out unless you’re in’. When Charlie Parker first stood on stage he improvised himself out of control. The drummer unscrewed his ride cymbal and threw it on the floor, making the young man realize all the others had stopped playing.

We look at the attempts that are successful at breaking new ground and would like to do the same. Instead we end up copying another person’s individually aquired style.

Edward Johnston: ‘Originality comes of necessity, not of searching’. There is nothing original about copying someone original. One of Johnston’s last advices to his students was: ‘Tell them to look up the word ‹authentic>’. A couple of generations of scribes unfortunately copied Johnston’s foundational hand instead of the original manuscript, Harley 2904. Ann Camp taught me to look twice. On the same ‘note’, Edward Johnston also said; ‘One may lawfully follow a method without imitating a style’. I would be the first to admit that much of Johnston’s work is dated, but considering the question of whether it is spirited and has life, the answer is unequivocally ‘yes’. And he made important discoveries that are of value to consider today.

It all gets confusing, we whirl around from one script to another, from one writing tool to another, trying to perform all acts, a bit of expressive German ruling pen work, a bit of English foundational hand, a bit of American brushwork. There are graphic effects and different materials available to us. We emboss, guild, add watercolour washes, marbled papers, a bit of sandblasting.

A tattoo used to be something you had earned; you had been to sea, you had been to Shanghai, you had been in jail. Now rock’n roll is mainstream, punk is exploitable, critique of capitalism is a beret on the head of a marketing analyst. The galleries are ruled by the curators and the art by their ideology. Crafts are kitschy playthings.

There is an illustration by Hermann Zapf with a cross in the middle. Out from the cross he has made several arrows pointing in different directions, one points to the word ‘fractur’, another to the word ‘cancelleresca’, another to ‘antiqua’ etc. One of the arrows is curled in upon itself, meets the word ‘confusion’ and points back to the center again.

We might end up with a crushed confidence, thinking that calligraphic excellence should just come to us as a lightning strike of divine inspiration. And it doesn’t. Or even worse, we settle for low standards, thinking that it doesn’t matter; why should it, when others get away with weak flourishes, unsharp letters, bad proportions, unclear strokes. The I that we have constructed has expressed itself, that is what we care about.

‘And life is but a field mouse / not shaking the grass’. Ezra Pound.

The most successful attempts at renewing the alphabet, the strokes of letters, come from the hands of people who have spent a lot of time practising. It is like in any other art or craft. Basic and sound models are tediously copied, a lot of frustration and weariness has passed by, it has taken time away from other matters, it has been a kind of ‘investment-in-loss’. The marketing and graphic design industry pays enormous sums of money to people who have no idea about good letterforms, the history of letters, good craftsmanship and sound taste. Some regardlessly have insisted that ‘making good letters and placing them well’ still has some human value.

Blues music is built up of very simple chords and scales. and it’s origins are far away from the marketplace, from the place where everything is measured in money and success. It comes from the porches of poor black people in the States, supressed, exploited, weary. The joy of having instruments, songs & rhythm, eases the pain, makes it more endurable. There is a recording of Elvis Presley, late in his career, singing gospel music with musicians backstage, far from the fame that trapped him, the glitter and the dope. It sounds as if they have barricaded themselves in the bathroom. Perhaps one last chance to go back to the joy it sprang out of.

To start with we may well seek to master two or three basic hands, like Roman capitals, Foundational hand (or antiqua) and Italic, and try to make these meet Edward Johnston’s criteria of ‘sharpness, unity and freedom’. This alone takes some people a lifetime, and gives ample opportunity to apply these hand to various contexts: invitations, posters, signage, letterheads, pieces of litterature. And speaking typographically; you can come a long way just using two or three good typefaces.

Every time the great master calligrapher Hermann Zapf used to visit Ditchling in England, where Johnston used to live, he placed a rose on his grave.

At some point in time we may feel a deep need to change, explore or abandon certain shapes. Hopefully the result is an improvement. There has been an inner need and necessity to do so, not simply because we would like to be someone else, or steal someone elses style, but because it felt natural for us. And if we have aquired a good understanding of structure, of proportion, of the materials we use, we may borrow and modify details and letters from any source.

‘Try to put yourselves up against form, fight to free yourselves from it. No longer define yourselves by your own definitions. Be sceptical of your own opinions. Avoid everything that is an expression of yourselves. Like the bird fleeing from the snake you shall flee from the temptation of external identity.’ From Ferdydurke by Witold Gombrowicz

In the face of confusion, or conclusion, we may return to our oldest friends, the sound and simple models from where we started our exploration, and perhaps discover that we are never quite finished with them, there are still explorations to be made, there, at the starting point, where we are beginners.